Why bread is bad

Bread was by far the most popular choice of food offered to wild birds, making up two-thirds of the total. Most people feed birds so as not to waste bread or meal leftovers, but for birds, it’s actually the worst option.

The nutritional value of bread is not a good match for the needs of wild birds. It’s deficient in amino acids, fatty acids and several vitamins and minerals, but full of carbohydrates and salt – all the stuff birds don’t need and little of what they do. If birds are overwhelmingly eating bread instead of natural options, it could lead to health problems. In many ways, this is unsurprising. Just imagine how you would feel if your diet only consisted of bread. As your new year’s resolution, avoid bread when feeding the ducks.

But what should you feed them instead? Here are some options, ranked from best to worst.

Eating bread can be deadly for birds

The bird doesn’t realize it has wasted an opportunity to be nourished, it has eaten its fill. It will continue going about its business, its body burning calories just the same. With a stomach stuffed full of nothing. With no calories to metabolize to stay warm or provide energy to evade predators.

For a small bird, this can lead to tragedy very quickly. A Black-capped Chickadee can freeze to death overnight, with its stomach full of bread.

What Kind of Bread is Okay for Birds?

If you want a kind of bread that is ok for birds then feed the birds with bread that is healthy for humans is a good line to toe. Organic wholemeal or multi-grain is preferable.

To make bread even better for birds you can laden peanut butter all over the slice before breaking it up into smaller pieces.  Peanut butter is high in fat, calories, fat and magnesium. 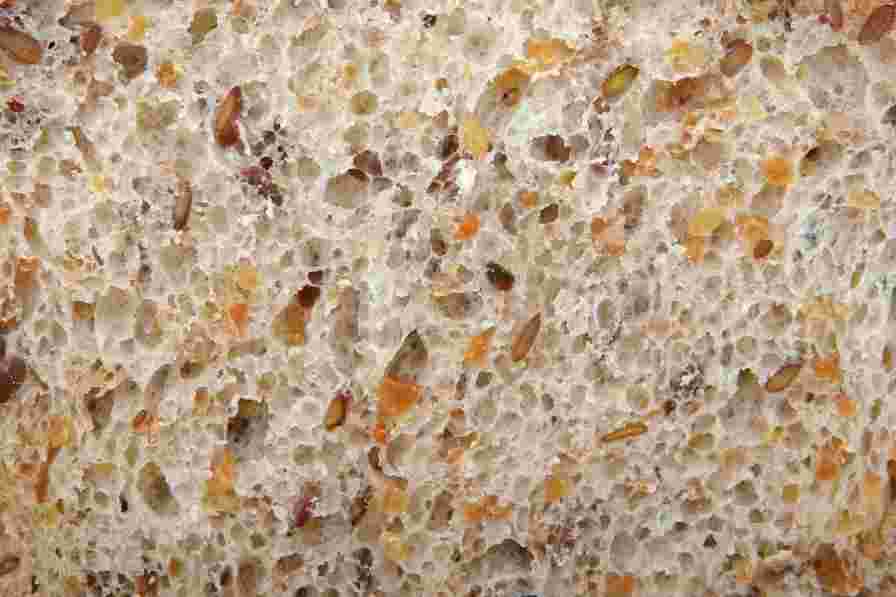 Using thawed bread (like other types of frozen food) can lose some of its nutritional benefits too.  As always, fresh bread is best should you not have more suitable bird foods to hand…

Mouldy bread already has fungus growing on it and can be very dangerous to birds.  Inhaling the spores can affect their lungs and potentially cause serious damage or death to a bird.

Even better, Quacksnacks are attempting to reduce plastic waste with new packaging. Kids of the Wild got to try them out first!

We water-and-duck-tested the pellets with wild kids of all ages and the conclusion is:-

Try Quacksnacks or any of the other food options above but whatever you do, please don’t feed bread to ducks.

Wild wishes for fun family encounters when you take your children to feed the ducks!

High in carbs, not beneficial

One thing bread is high in, and partially white bread – is carbs, well this energy nutrient has little value for birds.

Well birds can eat other foods containing carbs (pasta, rice, etc.) its one thing to stay clear of as its likely to fill them up the most – just as it does people.

Wild birds only need protein, fibre with high in fat and calorie peanuts and seeds. Bread does not offer this in the quantity that is required.

Luckily, there is a number of breads that do offer less carbs with a focus on fibre and protein, so give those a try.

If you want to avoid high in carb bread, then avoid the white kind at all costs.

Instead focus more on the less common bread such as multi-seeded, or better still the pumpkin or sunflower seeded bread.

What is Angel Wing?

“Angel wing” is a deformity commonly found in ducks, geese, swans, and other waterfowl. There has been little scientific study done on the condition, yet most wildlife and waterfowl experts agree the overwhelming cause of angel wing is an unhealthily-high protein and/or carbohydrate-based diet. The disorder causes the last joint in one or both wings to unnaturally twist outward, rather than lying flat against the bird’s body. 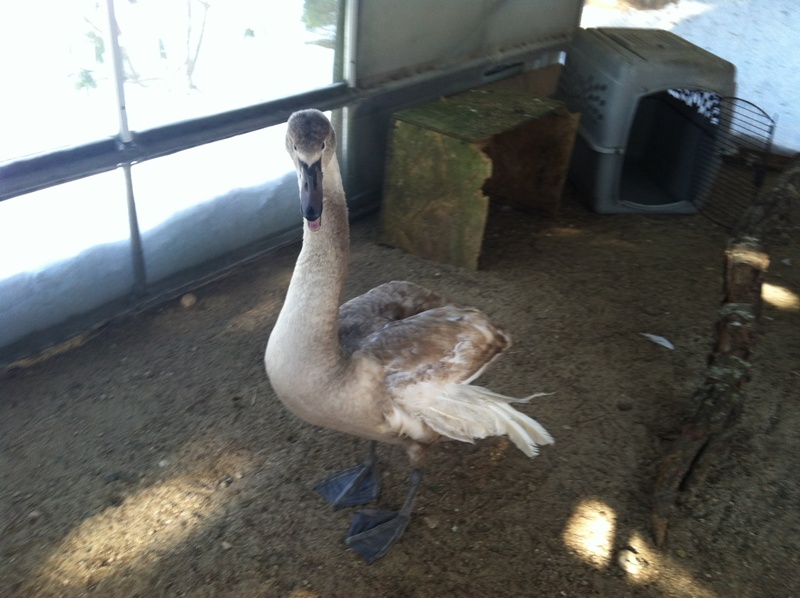 What Should You Feed Ducks and Geese Instead of White Bread

Below is a list of alternative food you can take the next time you visit the park:

Two for the price of one on this selection of bread, and well both seed mixes are good for birds, the mass produced sliced bread option lacks huge amounts of seeds.

This is still enough to raise the level of protein on this bread, well the fibre contents remains steady with all other sliced bread.

Seed loving birds love sunflower seeds so will peck them off the crust they're baked into, but they should try the pumpkin seeds as both are tasty to birds.

Well the loaf is baked with a white bread, there's little else this type of bread can benefit birds, so keep it to one slice only. Tesco Finest Sunflower & Pumpkin Loaf.

Mix in to regular bird food

Make bread crumbs more healthier by not only serving as little but irregular as possible, but only use crumbs as a way to bulk up proper wild bird feed.

Birds notice bird food so will do more if there’s more of it to be seen.

Mixed within the white soft crumbs and the brown crumbs of the crust can be far more wild bird seed mixes, with any nuts thrown in.

In this scenario birds are likely to ignore the bread crumbs all together while instead eating what they know best. 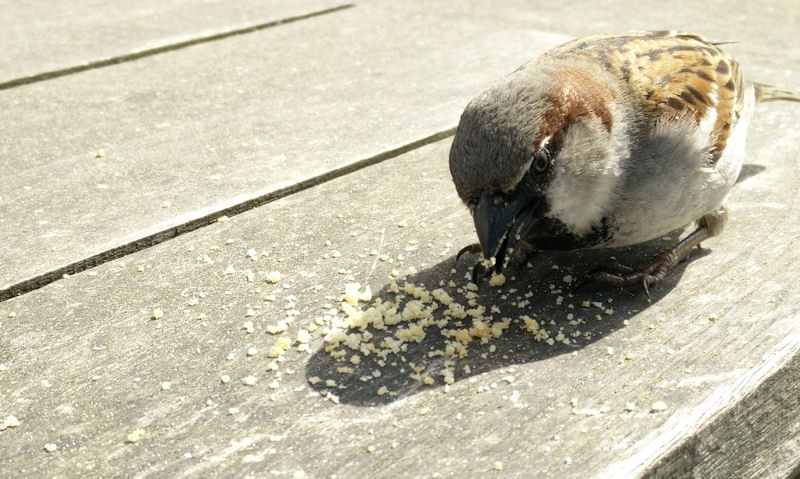 Sparrow of all birds is the most common species to feed on bread, or bread crumbs as seen in this picture.

Bread crumbs are likely to blow in wind so be sure to soak them to weigh it down, then to mix in seeds and peanuts can help steady it in rough conditions.

Do not mix in bread crumbs into bird feeders of any kind as bread is going to spoil quickly – whereas specialty bird food would last up to a week later.

Consider using bread crumbs with regular bird food in the backyard when specialty bird feed has run out or the little amount you have left needs boosting to help the bird food be seen.

How Is Angel Wing Treated?

Cape Wildlife Center, a Barnstable, Mass.-based wildlife rehabilitation center operated by The Fund for Animals, an affiliate of The Humane Society of the United States, treats about 2,000 animals per year, including a significant number of geese, swans, and ducks suffering from angel wing. The highest incidence of admission is late fall or winter when affected birds have grown enough for the condition to be fully and painfully apparent.

If the patients treated are very young, the condition can sometimes be minimized by splinting and repositioning the affected wing while feeding them a proper diet for optimal growth. Even then, a full recovery is not guaranteed. For rehabilitators, it can be emotionally taxing to see birds denied the chance for a full and productive life because people didn’t know about the dangers of improperly feeding them. 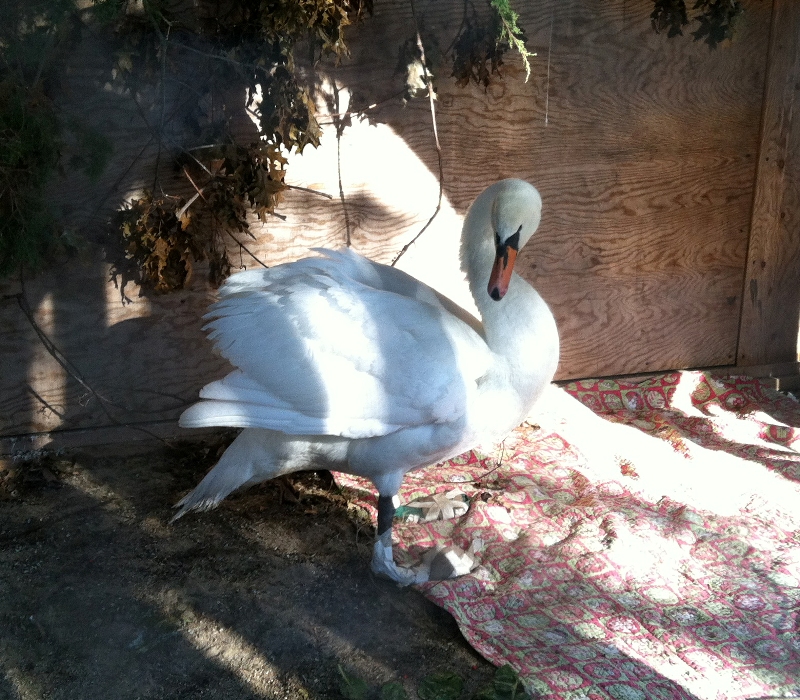 For adult birds, the condition is almost always a death sentence: They are struck by cars, killed by predators, or die from nutritional deficiencies or weather extremes. Even birds who are rescued and brought to a rehabilitation center will surely die if set free. They must be placed with a sanctuary for the remainder of their life, and there are not enough sanctuaries to meet demand.

Rice, both cooked and uncooked, isn’t a bad choice. It provides a good source of energy but is quite low in nutritional value. Feeding birds with large quantities of rice can result in deficiencies in other nutrients. It’s also important to only give plain rice – never seasoned or fried rice.

Giving lots of uncooked rice can give ducks a sore stomach because it reacts with water in their gut. Uncooked rice is perfectly safe in small doses though – in spite of what urban myths might tell you.

2. Free Food Isn’t All It’s Quacked Up to Be

In addition to the nutritional issues posed by abundant bread, too many handouts of any kind raise a wide range of problems for waterfowl. These include:

Too many birds means too many droppings. That’s a health risk, both in water and on land. Plus, as the New York State Department of Environmental Conservation points out, “diseases generally not transmissible in a wild setting find overcrowded and unsanitary conditions very favorable.”

Artificial feeding has been known to shorten or even eliminate migration patterns of waterfowl. They may be reluctant to leave a reliable food source despite the onset of winter, and then struggle to survive as temperatures fall — especially if the cold discourages their human feeders.

Our gifts may also spur a few other negative changes in birds' behavior. When adult ducks become obsessed with free bread, for example, they may fail to give their ducklings a sufficient education in foraging, thus committing them to a life as beggars. Once birds are dependent on handouts, they tend to lose their fear of humans and behave more aggressively.

What food is good for birds?

The good news is we don’t have to stop feeding the birds in our backyards, we just need to feed them the right food—food that maximizes the nutrition they require to survive and thrive.

See ‘Quality Bird Seed and Clean Feeders Matter‘ for more information about healthy food you can provide for wild birds.

What to Feed Birds

The good news is we can stop harming birds by feeding them nutritious food. Food pellets and seeds are inexpensive and will provide nutrition. Seeds contain vital fat and protein that birds need in order to be nourished and thrive. As they are nutrient dense they are small and easy to keep in a coat pocket.

Grapes chopped in half and kale in small strips are great for most birds due to being bite-sized and nutritious. Whatever food you feed them it needs to be in small pieces for their mouths.

Do research in your local area to ensure that the food you feed the birds is needed and therefore beneficial. Different birds in different locations have different needs.

Next Next post: 10 Ways to Make Walking with Kids Wonderful