Streaming Audio from Your Mac to Your iOS Device

Step 1: To stream audio from your Mac to your iPhone, iOS device (iPhone in this case) or any other AirPlay enabled device, open the Airfoil application on your Mac and its counterpart on your iPhone or other iOS device. Once you do, your Mac will show up as a streaming device on your iPhone.

Step 2: Next, on Airfoil on your Mac, click on Select a Source to choose the application you want to stream audio from. It is a nice addition that not only can you stream from iTunes, but virtually from any other application on your Mac, including popular ones like Rdio and Spotify.

Also, your iPhone and all other devices capable of receiving audio will show up on the Airfoil window.

Cool Tip: If you have some speakers or a sound system that supports your iOS devices but that are not AirPlay enabled, they will still be able to play your streamed music with Airfoil, since it is your iOS device receiving the stream, not your speakers. Kiss goodbye to those expensive Airplay-enabled speakers!

Important Note: If you choose a video player like QuickTime, it will only stream its audio.

Step 3: Click on the music note next your iPhone’s icon on the Airfoil window to select your iPhone as the target device for streaming. Then start the app you chose to stream audio from, play any file and your iPhone will start playing the audio immediately.

AirPlay to Apple TV: How to switch AirPlay Mirroring modes on your Mac

AirPlay Mirroring will default to mirroring your HDTV’s native resolution on your Mac. However, if you want to change that, it’s easy to do.

Previously only available in China, the OnePlus 10 Pro is being prepared for a global launch in the spring. Boasting fast charging and an impressive camera system, this is how the new model stacks up against the iPhone 13 Pro line.

Speaking of streaming video software, Mac users are unfortunately facing with limited choices, as most of which are designed to stream Mac to iPhone, iPad etc, and when it comes to stream from iOS to Mac, that number shrinks close to zero. Here is a well-known trick (not officially announced by Apple) that enforces streaming iOS devices to Mac by using QuickTime Player. But this trick does not always work and faces problems like:

1. Streaming video and dropping frames 2. Steaming video but only audio works 3. Choosing the device to stream but it cannot be connected 4. Selecting the given option but it automatically reselects the built-in speakers 5. Other problems like streaming interrupt, choppy, black screen, etc.

If you are looking for solutions to fix the problems above, you will soon find that there is little information that can provide solutions, and most of them do not work. Also, we do not want to ask you to direct connecting iPhone or iPad to Mac with a lightning cable although it provides the most stable and fastest content streaming experience. To stream video from iOS to Mac, the unparalleled streaming software for Mac 5KPlayer, which is able to stream iOS to Mac, comes to your help. This all-in-one streaming player, serves as an AirPlay receiver, can stream any videos, movies and music, like the hot movie Parasite, HBO Westworld TV series, Disney Onward, Taylor Swift – The Man (music MV) and many more, from iPad iPhone to Mac based on Apple’s wireless technology AirPlay, with no quality loss and no storage space needed.

AirPlay to Apple TV: How to stop AirPlay video on your iPhone and iPad

When you want to stop AirPlay, it’s just as easy.

Method 4. How to Transfer Music from Mac to iPhone with Cloud Services

Cloud services like Google Play Music, Dropbox, and Amazon Music also enables you to transfer music from Mac to iPhone by syncing. These cloud-based music streaming services not only help to sync your data across your devices but also allow you to enjoy songs without downloading the items, and thus save your iPhone storage. Of course, you can download music to your iPhone to listen to it offline.

These cloud services work in a similar way. Let me take Dropbox as an example:

To sync music to iPhone from Mac with Dropbox:

Step 1. Download and install Dropbox on your computer and iPhone.

Step 3. Upload the songs from the computer to Dropbox.

Step 4. Go to Dropbox on your iPhone and you will see the items you uploaded.

Step 5. Download music from your Mac to your iPhone according to your needs. 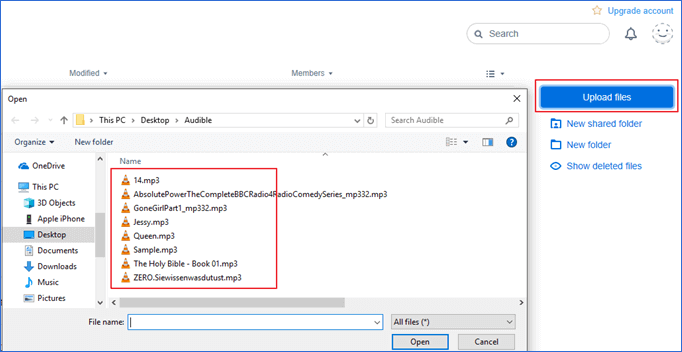 When you sync music to your iPhone using the default method, all the songs in your iTunes library are transferred. To make better use of your iPhone's storage capacity, only sync the songs you want to play. To add certain songs and playlists from your library to your iPhone, you must first enable manual control.

Hyper makes a wide array of USB-C hubs for Mac and iPad, but this one of the first we've tried that has physical media controls built-in alongside a plethora of ports.

How to get rid of static cling without dryer sheets

Canonical "do I need to recheck luggage?" question

Where do you go to get quarters for laundry?