Back in March of 2013, Mrs. Cubert and I went on a lovely Caribbean cruise. It was one of those professional seminar deals. She spent a few hours each day with other chiropractors learning about something or other, while I read War and Peace by the pool. I’m not sure which of those two activities sounds appealing in retrospect, but I’d have been happy balancing my checkbook in THAT setting.

It was on our way home that we ran into problems. Our Delta flight out of Miami had mechanical issues. The real rub with this is they kept cascading the delays. So every hour, we were told it’d be ANOTHER hour. Until finally, at around 9 PM, after five hours of this nonsense, the flight was canceled altogether.

Delta gave us zero options for what to do next, so we all queued up in line for another two hours to re-book a flight the next day, and beg for some help with lodging that evening. We’ve experienced this before in our travels, on a trip over to Switzerland in ’08. Air travel is just a roll of the dice, as with any travel I suppose.

Our Delta helper at the counter hooked us up with a voucher for a nearby hotel and a flight out the next day. The funny part was how, after the taxi dropped us off, we learned that THERE WERE NO VACANCIES. Well, sh*t!

Our voucher was worthless. Thanks, Delta. We eventually managed to get to another hotel, order a pizza, and crash. $225.97 for a night at the Miami-Dade Sorority Inn.

Here’s the complaint letter I wrote to Delta, within a week of getting back home. Still glowing from a great trip, and sporting an okay tan:

I am writing to request a refund check for $225.97 to reimburse hotel charges paid out of pocket on Sunday, March 24, 2013. We were unable to use the voucher issued by Delta on that day, upon arrival at the hotel, due to the fact the hotel was fully booked as of Saturday, March 23. I have attached documentation to substantiate our claim, including the actual voucher, the occupancy register for the Doubletree Hotel (provided by the on-call manager), and finally, the receipt for our eventual hotel, Spring Hill Suites. The delayed flight behind the voucher-request was DL1860 Miami-Atlanta, March 24, 2013.

Please call me at (555) PEE-OWED if you need any additional details or background information. I am saving copies of all documentation for legal, and if necessary, PR purposes. Having been sent to an already fully booked hotel after waiting at the airport for hours on end, with a mid-term wife pregnant with twins, one can imagine the frustration we feel with Delta Airlines customer service. Your rapid response is appreciated.

How that turned out…

Within a week I’d received a letter from Delta’s VP of Customer Service. He was extremely gracious and apologized for the inconvenience we’d gone through. We were compensated for a little north of the hotel cost in the form of a gift card to one of several retail outfits if I remember right. With kids on the way, this was super handy. I think we bought a rug for the baby room.

Better than the compensation though was simply the fact that Delta jumped on this problem and quickly made amends. I know they, like most airlines, struggle to balance customer service with profits, but for a brief shining moment, they were okay in my book.

As for the letter, you’ll notice there’s no secret to how I put those few paragraphs together. Maybe it was the reference to “PR” or CC’ing my estate lawyer? We don’t have an attorney on retainer, so the lawyer who drew-up our will (I figured) would stand-in nicely. I never bothered him by sending an actual copy.

Bottom-line, just take the half-hour or hour to write-up your experience in a professional but assertive manner and get that thing in the mail. My hourly rate for writing this particular letter was $225.

Check for Formatting Errors and Typos

Once you have written your business letter, proofread it and spellcheck it on the screen. Then print it out and read it through at least one more time, checking for any errors or typos. This is important as it's often easier to spot errors on a hard copy.

Reading it out loud is a good way to catch a mistake.

Be on the lookout for formatting errors, such as two paragraphs that don’t have a space in between them or lines that are indented incorrectly. Then, before putting your letter in an envelope, sign above your typed name using black or blue ink.

If you are using Microsoft Word or another word processing program to write your letter, there are templates available that can help you format your letter correctly. Here’s more information on free Microsoft Word letter templates.

Exceptions to the Rule

There are exceptions that prove the rule. The rare instances in which I agree to write a single letter for a client have three factors in common.

However, even when those factors are present, it’s rare that I agree to just write a letter. I’d rather be Arden than Bob.

Rarely is it the case that an employer backs down after a single letter. The first letter is the opening salvo.

Next, the company will respond, usually in writing, to your attorney. To solve the problem, the attorney you hired will probably need to call the opposing counsel back or perhaps write another letter. This process could go back and forth literally for months. During that time, for your attorney to effectively solve the problem, she will need to talk to you, review documents, and potentially research case law.

But what happens when the company responds but all you’ve done is hire a lawyer to write the letter? The lawyer will pass the letter along to you. You can then try to take matters into your own hands, but this is what will happen. You’ll write the company back. The company, thinking that you are perhaps still represented by an attorney, will refuse, through its lawyer, to talk to you about substance. Why? It is against the rules of ethics for a lawyer to talk to someone represented by another lawyer.

Of course, you can get around this problem by telling the company that you no longer have a lawyer. Then it can talk to you. The problem is, now you really have no leverage. The company lawyer now knows that—because you only hired a lawyer to write a single letter—that you do not have the will or resources or will to fight this out. Game over. 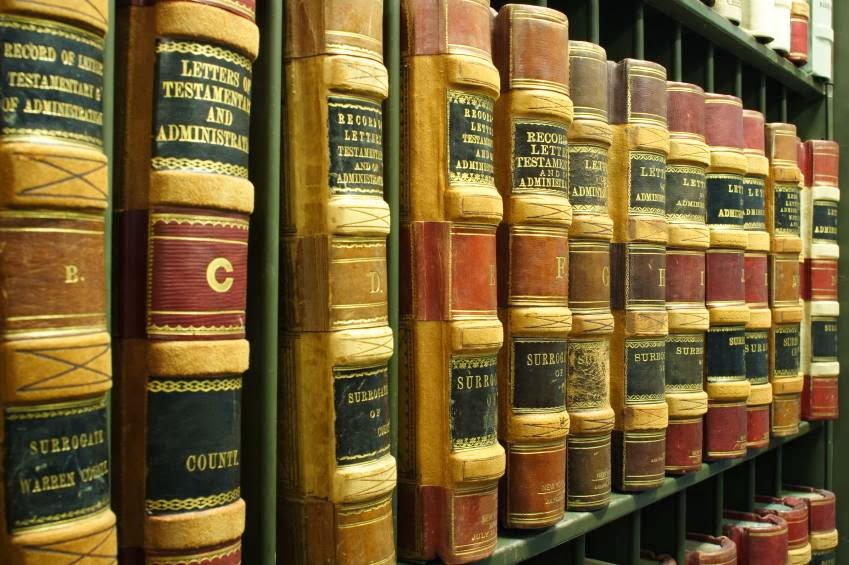 How to Write a Strongly Worded Letter of Complaint

Here’s an excellent checklist to help you navigate the complaint letter waters: From . The only thing I don’t necessarily agree with is the notion of working your way up the corporate ladder with your complaint. I figure, start near the top. Send the letter to the VP of Customer Affairs. You will (well, you should) be heard…

And if you’re in the mood for some laughs, check out the Best Ever Complaint Letters. There are some royal doozies here. For example the angry letter to the male head of marketing at Always feminine hygiene products. Whoah. She should be a blogger!

Please share in the comments any advice YOU have on how to write an effective letter of complaint. 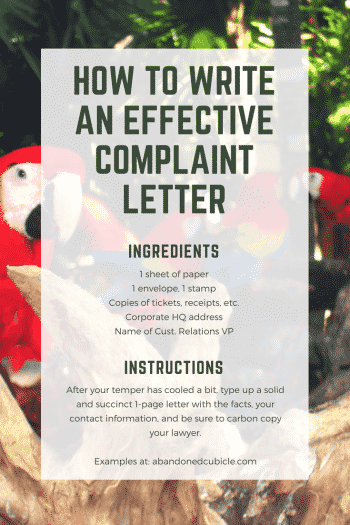 Knowing how to write business letters is an essential skill, so here are several additional articles for you to learn more:

Start With the Basics

If you like to learn by looking at examples, there are many types of business letters to choose from, such as cover letters, interview thank-you letters, follow-up letters, job acceptance or rejection letters, resignation letters, and appreciation letters. You’ll find all those along with samples of business and employment-related letters in this review of letter samples.

Not all business letters are printed out and mailed. If you plan to send an email, review these guidelines for professional emails and letter writing.