You can set up a Slingbox for every video component in your home, but you can only access one Slingbox at a time. Depending on your Slingbox model, you can connect up to four components to one Slingbox. If you hook up your digital cable box and your DVD player to a single Slingbox, you can switch between them at the click of a button on your virtual remote control. You should check for the latest firmware updates before using your Slingbox.

The Slingbox is actually a pretty straightforward machine. The main components involved in slinging your video signal are:

To access the stream from your Slingbox via the Internet (as opposed to your home network), you tell the Sling Media server to find it for you. Every Slingbox has a Finder ID that’s stored on your computer. When you initiate a remote connection to your Slingbox, your computer tells Sling Media’s server what the Finder ID is, and the server matches your box’s ID to its IP address. When you change the channel using your virtual remote, the command travels to your Slingbox just like any other Internet command — as upstream data intended for a particular IP address. Because the video stream is downstream data, and remote commands are upstream data, the video travels faster than the commands. You may experience a delayed response when you click a button on your virtual remote.

SlingRemote Using a virtual remote control on your computer screen, you can control the video source just like you were sitting in your living room. You can push buttons on the remote using a mouse or trackball or your keyboard. SlingPlayer has a wide variety of remote skins for you to choose from, and many are based on the actual remote models sold with specific TV and set-top models. You might be able to pick one that looks exactly like your home remote.

Viewing modes You can watch the video stream on your computer as a full-screen view, a movable window or a Slingbar. Slingbar creates two separate areas on your computer screen: a "workspace" and a video space. If you’re surfing and watching TV at the same time, you can maximize your browser window and not block the Slingbar video screen — the browser window will only maximize to the extent of the "workspace."

These Slingbox alternatives are compatible with most of the AV devices. It mainly includes cable or satellite receivers.

Yes, these Slingbox alternatives work and remain compatible with most of the mobile devices. You can make them to work with your iOS phones and also tablets.

Even more, you can easily connect them with your Android phones, Windows Phone and also Windows 8.1 devices.

Yes, you can connect the Slingbox alternatives directly to your TV station. You can hit and click on the feature which states the “pass-through” feature.

This step is going to pass on the connection to your television with the help of an output port.

The Future of Remote TV

Sling Media struck it big by simplifying a process that has been around for a while, but mostly in high-tech circles. There are free downloads available, like VideoLAN, that let you stream any video signal (as well as pictures and music) from your home PC over the Internet, but these applications typically require a host PC along with a deeper level of technological expertise than the general public is comfortable with. The Slingbox offers placeshifting functionality in a device that’s about as complicated to set up as a cable box and doesn’t require a host compter. Slingbox is flying off the shelves because it makes remote viewing accessible to the masses.

Sony’s LocationFree TV is a comparable product — it’s $200 and it has very similar functionality. In addition to computers, LocationFree TV also directs a video signal to a PSP. TiVo Desktop lets you watch your pre-recorded TiVo programs on your PC, Internet-connected laptop or a wide selection of handheld media players. If you have a TiVo Series 2 box or a TiVo HD DVR and you don’t need to watch a show in real-time, this could be a good way to go — there’s no additional hardware or service fees involved.

There are also some free downloads out there, such as Orb and VideoLAN, that let you watch your TV programming from a computer. VideoLAN is combination media player/server that supports both Linux and Mac OS in addition to Windows machines, and Orb can stream content to Web-enabled smartphones and PDAs in addition to computers.

To stay ahead of the competition, Sling Media is in constant upgrade mode. Sling Media offers an HD version of Slingbox. The Solo and PRO models can accept HD content, but they both down-convert the signal into a standard definition format before streaming it to your device. Only the Slingbox PRO-HD can stream HD content to other devices.

The big issue right now surrounding "placeshifting" TV is about copyright and digital rights issues. Like the music and motion-picture industries, the TV industry is concerned that people are going to be able to access their product for free. In the case of Slingbox, it’s not just a concern about one person subscribing to HBO and giving their friends their Slingbox access codes so they can watch "Rome" without paying for it. The spatial nature of TV licensing adds another dimension to the risk. TV stations typically purchase program rights for a specific region, so "placeshifting" the TV signal infringes on regional access rights for certain shows. Sling Media says it’s observing copyright and digital media laws because the Slingbox is a one-to-one transmission device. Slingbox owners can’t broadcast a show to everyone they know. Only one person can access a Slingbox at a time, and if the device is used properly, only the person who pays for the programming can watch it. Only time will tell whether the TV industry will accept placeshifting technology like it ultimately accepted the "timeshifting" capabilities of TiVo and other DVRs.

For more information on Slingbox and related topics, check out the links on the next page.

Slingboxes aren’t the only products in Sling Media’s arsenal. They also offer the SlingCatcher, a device that can send content from the Internet (or a Slingbox) to a television connected to the device. Think of it as a Slingbox in reverse.

Before moving to Spain, I made several trips abroad and would think, “I could really live here.” The thought was normally followed quickly by another: “If I could only watch American TV.” I know it sounds vapid when you put it like that, but try watching an episode of Family Guy dubbed into Spanish. The humor doesn’t translate.

Unlike a lot of my snobby Bay Area or New York City acquaintances that claim they don’t watch TV or (and I question this one) don’t even own a TV, I’m not ashamed to say that I can’t live without it. From “Good Morning America” to CNN to The Discovery Channel, my media diet consists of a healthy helping of broadcast news and another of mindless fluff — with a daily dose of PBS to round things out, of course. 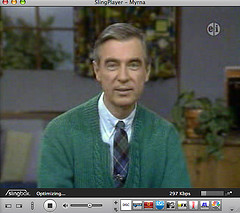 Mr. Rogers on my Slingbox

The dilemma of how to get that while living outside of the United States was haunting me until I found the Slingbox. Would I see the finale of “Dancing with the Stars”? What about “Nightline”? “Frontline”? Comedy Central?!

Or would I have to resort to the not-so-ready-for-primetime online TV services that have been cropping up over the last year? Last year I wrote about the future of TV online and my observations weren’t very positive, because these services are less than accessible. The difference between something like Joost or Hulu and Slingbox is that the latter is just regular old TV. No selections based on what the networks want you to see, no downloading, no blocked access (most of these services require a U.S. IP address) and no money out of your pocket — except the one-time device fee and whatever you pay for cable.

The choice of what to watch is as much yours as it is when you are at home. All you need is to hook the box up somewhere in the U.S. In my case, I had my mom hook it up in Texas so what I get here is whatever is available to anyone in the Houston area. 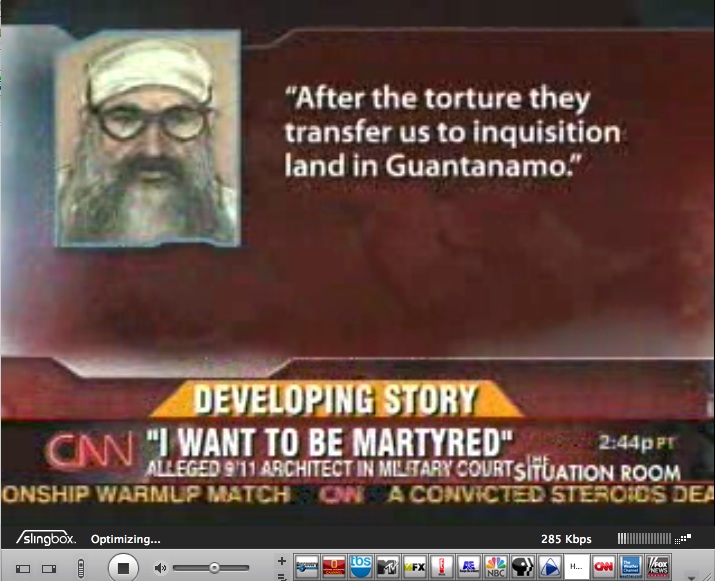 Another thing I couldn’t stand about the online TV experience back when I wrote that post was the leaning forward rather than kicking back involved in watching and controlling online television. Desperate to replicate a normal TV viewing experience, I’ve found a rudimentary way around that. I connected my Macbook via a video adapter to my television so that it acts as a monitor, and then connected a headphone-type of cable to run sound from the computer to the television. It’s all very wiry and unattractive, but it allows me to kick back and relax.

A less technical and unexpected virtue of Slingbox has come in the form of a cultural reality check. After living in Bay Area isolation for so many years, I’m once again exposed to local programming from my home state of Texas. I’m reminded that at any time of day on at least three channels one can watch some kind of religious programming or high school football, and that not everyone in the world will be voting Democrat this election season. It’s almost like being home again.

Will there be any new Slingbox devices in the future?

Slingbox has officially confirmed in its announcement FAQ that they will not release a Slingbox device in the future and is also no longer shipping any of their products.

In addition to scrapping their product line, the company also revealed that it is discontinuing some of its apps including:

All the other apps will continue to work as intended and will receive maintenance updates.

Can any of the solutions replace your Slingbox?

Certainly not. Even after Slingbox’s launch, there haven’t been any other solution that has allowed users to stream content directly from their TV to their smartphone or computer. While there are DVRs and streaming devices that might be able to satisfy most of your media consumption needs, we still don’t have THE perfect alternative for the kind of service and features Slingbox offered.

How do you feel about Slingbox leaving the streaming device business? Are you finally going to let go and upgrade to an OTT streaming device or do you think digital voice recording devices are still relevant?

How to speak in a more confident and loud voice

Learn How to Use NZB File With A Newsreader